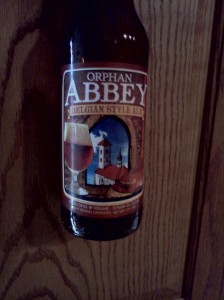 The beer, though, is not good at all. Well, it is pretty. I appreciated the clarity of he body and the brilliance of the orange/brown color. 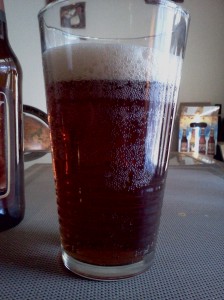 The head was adequate if not long lived. I suppose that could be attributed to my glass, too.

But the taste was just bad. It is supposed to be an abbey style beer, obviously, which means it should have some dignity and complexity.  This thing had a terrible, stale aroma and a too fizzy body, like a very cheap macro that shall not be here named.   I feel that part of the issue is the low alcohol content. 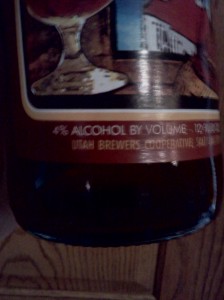 Yeah, that’s a little hard to make out.  My camera was even shocked that this Belgian wanna-be was only four percent.   Maybe that didn’t have much to do with it, I’m not totally certain.  I make a mild that clocks in at around 3% abv and I have no issues with it.  Maybe it was just my perception –  I saw the moniker “abbey” and I wanted something with a little gusto.   But the body and flavor was thin and boring and the aftertaste was a lingering cloud of bad ether. I haven’t been this displeased with a beer in a very long time.

This was from Squatters in Utah.   Don’t know much about them, but I think they should give up this style beer.  I sought the esoteric Belgian mystery in this nectar and found American blandness.  No fruitiness, no spice.  We’ll see how the other Squatter beers go.