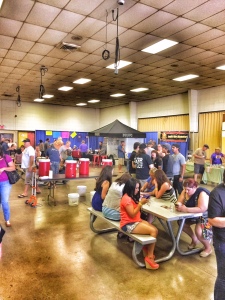 Thank you to the anonymous (to me, at least) driver of a Ford Expedition for having a decal on the back window of your vehicle advertising Saturday’s Mohave County Beer Fest. It reminded me to buy tickets. Marketing works.

Saturday’s event was relaxing and enjoyable. Indeed, ‘there is nothing better for us than to eat and drink and enjoy our lives.’ While I did no eating at the MCBF, I did drink and enjoy. So here’s a recap of the beers and breweries and a few notes about the event itself.

Black Bridge
Kingman’s local was pouring Secret Pass, a blonde ale; Holy Water, a Belgian Pale Ale; and Raspberry Poison. Holy Water is a refreshing drink, crisp like an APA with a little mystical off-ness to it. Owner and brewer Tim Schritter also discovered that Raspberry Poison (a wheat wine with a little raspberry) and Pints’ Chocolate Porter makes an awesome concoction. The Poison subdues the roasted malt while that roasted malt moderates the sweetness of the Poison.

Canyon Distributing
Not a brewery but a distributor with a few different offerings available here in Kingman. I had the Big Butt Doppelbock by Leinenkugel. Well made bock.

Founders
They were offering their Dirty Bastard, a scotch ale and several IPAs. The Porter was my natural choice. It was very roasted, sublimely black and tasty.

Four Peaks
Arizona’s heavyweight brewery was pouring several selections, including their flagship Kiltlifter. I chose their Peach Ale. It’s a golden ale brewed with Arizona peaches. It was moderately interesting and very easy to drink.

Goose Island
So, the volunteers at this desk were proactive. They were right by the entrance and encouraged everyone to get their first drink there. I complied. I’m not sure what I got, really. It was a Goose Island table, but I think they were pouring Widmer Brothers product. I couldn’t make out the label well enough. I think it was Brrbon ’12. It certainly tasted heavy and barrel aged. Oak and vanilla and lots of caramel malt were present. It was a strong, strong start to the festival.

House of Hops
This new local tap house didn’t have any of their own brews since that’s not what they do. But it was good to see them there doing their part to increase Kingman beer culture. They were pouring some Widmer beers, too. One was the Brrbon ’12 and the other a raspberry imperial stout. I sampled the stout. It was nicely done, but I honestly don’t remember too much about that beer.

Mudshark
Three words: Vanilla. Caramel. Porter. I had this either last year at MCBF or at the Boulder Beer festival. I may not remember the venue but I have not forgotten that beer. Look for it around town in their “Shark Cages.” The vanilla dominates the flavor, to be sure. It was good enough for seconds.

North Coast
Amongst the selections at this venerable breweries table was Old Rasputin, one of my most favoritest stouts. It did not disappoint. Also on the table was Brother Thelonious, a transcendent, jazzy Belgian abbey ale.

Odell
This Fort Collins trendsetter had a beer that briefly vied with the Chocolate Porter as best beer in show for me – and get this, it was an IPA. I have tried to make it abundantly clear that I do not care for that style. But Tree Shaker is a style breaker. The citrus smell and flavor blends seamlessly with the peach character. The usual hop overload is not present. It’s interesting that they still call this an IPA when it only comes in at forty-eight IBU and generally they should range from sixty to one hundred. It definitely shakes up the genre.

Pints
This brewery continues to impress me. I love their Rehab Red, and they had an interesting watermelon beer at a quondam festival. At this one they had a Chocolate Porter and it was my favorite beer from the whole event. The burnt, roasted malt that makes up the grist bill for this beauty had no qualms about showing themselves in the nose and in taste. It wasn’t aggressive or brutal, just delightful.

Shock Top
Ha-ha, yeah, like I would’ve even stopped at this table. Heh, funny, yeah – No!

Sierra Nevada
They were offering a kolsch style beer and I’d never had it. It was a respite from their usual hoppy masterpieces.

Stone
Almost as surely as Sierra Nevada, the wizards at Stone always have highly hopped brews. They were pouring one I’d not heard of nor tried before and it was a complex five ounces. It’s called Points Unknown (very esoteric) and it’s a double IPA blended with a Belgian tripel and aged in red wine and tequila barrels. It is one of those beers that is truly layered. The top layer was all hops – lemonpine for the nose, bitterness at first sip. Then the maltiness is perceived in the next layer, with some caramel and alcohol and that loamy Belgian mystique. It finished with tequila and wine. Still an IPA.

The Improvements
Attendees received a commemorative tasting mug. It’s a little thing but I was tremendously happy to get it. It shows interest in the culture of the fest and respect for the partakers. Good call.

The venue was much improved over last year. It was indoors, in an exhibit hall. The brewery tents and tables were against the walls all around the room leaving the center open for mingling and sitting. It was still small, the whole event could be taken in via one glance, but it didn’t feel as crowded as it did last year. The volunteers seemed more engaged, too. There was music, though not a live band. But, we’ve got to have ways to improve for next year, right?

Overall, it seemed like an insouciant, agreeable good time. It didn’t leave me as tired as last year with all the heat and noise and cramped area.

The After Parties
A couple of “thank you’s” also go out to Tim from Black Bridge and T.J. from House of Hops for their invites to the after-parties. I had not made it to the House before Saturday although it’s been open for weeks and is getting good word of mouth in town. They do offer lots of good beer. The place was loud Saturday night with all the people crowded inside. It’s not really my kind of scene, but I do like that very long bar and their selections on tap. The owners and staff are all very welcoming and that is a novel approach for Kingman. Doubtless I’ll be there again.

Black Bridge had a band out back, Almighty Dog, playing on a newly constructed stage.  B3 is planning on booking more bands and really turning the back lot into a cool hangout, making it even more like a neighborhood or backyard gathering spot. I enjoyed some more Holy Water and some Chiapas iced coffee, as well. Black Bridge has helped make the downtown area very interesting and I look forward to their future. 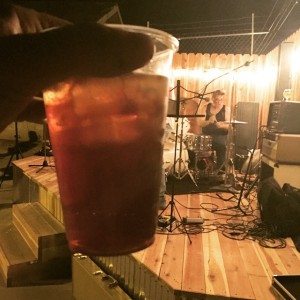 So, good improvements for the beer fest. It was an enjoyable event. It felt like everyone cared this time around. Look forward to year four.

One thought on “Mohave County Beer Fest, Year Three. Is There Hope For Number Four?”