Public events comprise volunteers, vision, negotiation, organization, and financing. Putting all that together, even for a smallish town like Kingman, calls for effort and interest on the part of a few for the benefit of many. Not only is there a great deal of work behind the scenes, this is also a public event with alcohol which can be dangerous if not supervised well. So, thanks to all those who put on the 4th Annual Kingman Beerfest.

Craft beer has slowly been making its way into Kingman. While we are on a scenic, historic highway and near freeway, we are still slightly isolated here in the middle of the desert. It’s hard to attract business, so I can imagine it might difficult to convince brewers to come to a small place for just a few hours when they may not get a huge amount of business out of it. So, a beer festival has been established; I think there are improvements each year. I hope the beer market keeps growing in Kingman. 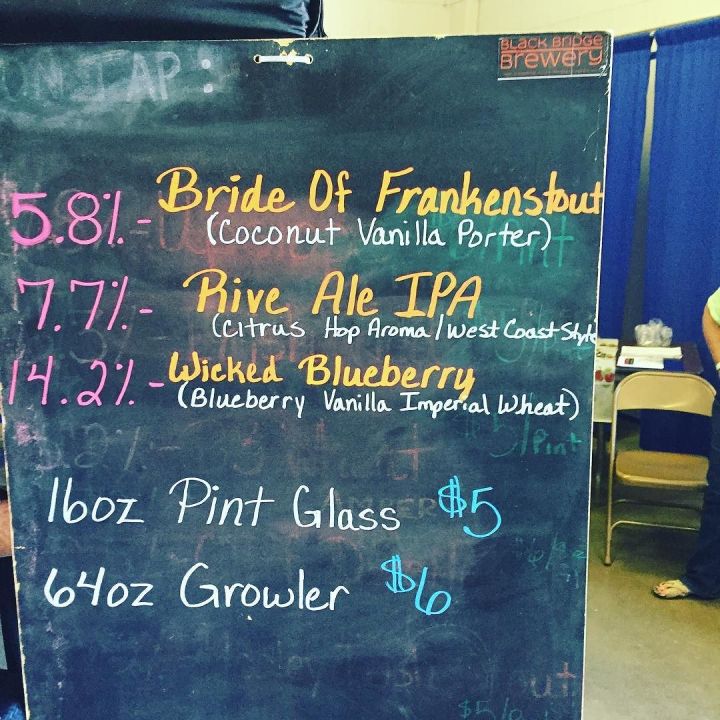 First stop: Kingman’s local, Black Bridge Brewery. B3 was pouring Wicked Blueberry, Rive Ale and Bride of Frankenstout. The Wicked Blue was my favorite of this years fest. It’s their Wicked Poison infused with blueberry, their answer to Big Blue Van from College Street, no doubt. Wicked Blue is a refreshing beer and at 14% abv it makes for a quick start to a beer fest. Rive is a great example of a west coast IPA and Bride of Frankenstout is a coconut vanilla porter. The vanilla dominates that porter, overpowering the barely noticeable coconut, which is fine with me. It’s a murky brown and easy to drink. The B3 crew also mingled through the crowd drumming up enthusiasm and business and checking out other AZ beers.

Boulder Dam Brewing
During a trip a few weeks ago our family stopped at the Boulder Dam brewery and because of some mechanical issues were not able to drink their Powder Monkey Pilsner. So I was happy it was available here. Very nice golden color and more citrus than I would’ve thought. Good work.

College Street & San Tan
As noted above, they did not have their own table or staff, but their Big Blue Van was available. It’s a refreshing wheat beer made with blueberries and is always a favorite. And, they had V. Beauregarde, a sour blueberry beer on site. It was fantastic. I was glad to get hold of this one since it was out the last time I visited the brewery. Definitely worth a growler fill the next time I’m in Lake Havasu. San Tan had a shandy there, I think. Not really sure.

Golden Road
This brewery is relatively new (2011) and from the LA area. Other than that, I know very little about them. Their brown ale, Get Up Offa That Brown is fantastic. While not complicated, it has a sweet caramel character and is easy to drink. The server at this table discovered serendipitously that the brown and the Citra Blend wheat make a palatable mix. The brown gives the wheat a little bit to chew on.

Lumberyard Brewing
It was good to see a Flagstaff brewery in attendance. Lumberyard was pouring Knotty Pine, Diamond Down Lager, Flagstaff IPA and Red Ale. That last one, the Red Ale – perfect. Medium body, perfect color, little hops attack, and just a hint of roastiness. The staff at the table was wonderful to talk with, happy to discuss their beer. Good show.

Mudshark Brewing
As I stated at last years festival: Vanilla. Caramel. Porter. Yeah, Mudshark has other beers, like Full Moon, but VCP is fabulous. It took two of my tickets. We also talked about their Mole Chocolate Stout, which was not at this festival – but I had it somewhere. It sounds like it was a specialty one-off brew, but I hope they keep it around.

Sierra Nevada
I like their gose, Otra Vez. So I drank that and I had their 11.5 Plato, a session IPA. Well, it was an IPA.

Stone Brewing
Oddly (to me), they were pouring a winter-spiced mocha stout called Xocoveza. A rep from Goose Island said it was like horchata in a stout. He was right. Cinnamon and nutmeg in a heavy body. It was sublime.

Monkey Fist Brewing
This brewery had nothing to pour since it is only in planning. I’m not sure that it should have had a tent. “Monkey fist” is a reference to a nautical knot.  They chose the moniker because of family ties to the Coast Guard. The brewery has big plans. Thompson, owner and hopeful brewers wants to “make everything.” Of course, that won’t be possible, so right now he’s mostly got IPAs in mind. Meh. I asked if they were open to sour beers. He said “not opposed.” That’s encouraging, because … sours!  I hope that the Monkey Fist crew is starting the brewery primarily because they love the craft of beer and beer itself.

THE OTHER PARTS OF THE BEER FESTIVAL

Like last year, this year’s festival was held at the Mohave County Fairgrounds, indoors again, which was a good call since it was about 109 degrees Saturday. There were sixteen breweries slated to appear. A couple were there only via a distributor, College Street and San Tan. I am a beer snob and did not consider Shock Top appropriate (but that’s just me) and Four Peaks gives me an ethical headache right now because of their sale to AmBev. And two of the “breweries” listed are definitely not breweries, namely House of Hops (a bar) and Monkey Fist, which is House of Hops’ pending brewery. Still, it’s not bad showing for a small, out of the way hole in the ground.

One of the organizers of the festival, from DMS Events, was pouring for Mudshark. I appreciated her enthusiasm and had an encouraging chat with her. We talked about using wristbands instead of tickets, but, alas, I think the tickets are an Arizona liquor law requirement. The rest of the volunteers who were pouring seemed much more personable this year than last year, so I’ll put that in the “improvement” category.

There’s been live music at every other festival I’ve been to and it lends a fabulous ambiance. Another improvement that I felt needed to be made, as noted in my write up for last year’s event was to have a live band for our beer festival. It happened. Now, I personally did not like the Red Hot Chili Pepper-ish punk-esque band that the organizers picked. They played well, it simply was not the kind of music that I feel fit the beer festival. It could be that I’m just showing my age. Keep the music.

Reading over my notes from last year, it does seem that this 4th Annual beer festival was smaller this year, both in number of vendors and in attendance. There was less spark in the crowd. I think if this were to happen in March/April it might be better attended. The weather would be milder, to be sure. Also, the lack of brewers present was a let down. That population seems to shrink each year, too. And there seemed to be less interesting beers this time. They were still good, but no saison’s and double this or that IPAs and barrel blended stouts, etc. Just some good standards. Granted, I didn’t get every beer, so I might have missed an magical one.